Harold II (c1020-1066) last Anglo-Saxon king of England (1066): Harold swearing an oath on sacred relics (c1064) before William of Normandy to support his claim to the English throne on death of Edward the Confessor.
Posted by Anglo-Saxon & Celtic Orthodoxy is about the Orthodoxy of The British Isles, Low Countries and parts of France, Scandinavia in the first millennium. at 16:53 1 comment:

At vespers on Friday, October 12, 2012, Bishop JOHN ordained Joseph Gleason and Jeremy Conrad as subdeacons in the Orthodox Church. The ordinations took place at the Church of the Holy Incarnation in Lincoln Park, Michigan. The following day, Joseph was ordained to the diaconate.
Posted by Anglo-Saxon & Celtic Orthodoxy is about the Orthodoxy of The British Isles, Low Countries and parts of France, Scandinavia in the first millennium. at 16:46 No comments:

Prayer of St. Columban of Iona
Kindle in our hearts, O God,
The flame of that love which never ceases,
That it may burn in us, giving light to others.
May we shine forever in Thy holy temple,
Set on fire with Thy eternal light,
Even Thy son, Jesus Christ,
Our Savior and Redeemer. Stone clochan, Ireland
"Other monks and nuns lived out their days alone....in small wood-and-mud huts; they kept a cow or two, and accepted gladly the gifts of an occasional loaf or basket of vegetables from local farmers. The desire for a solitary life and time to spend simply yearning for God...must have drifted through the hearts of even the busiest abbot in the most bustling monastery." (Bitel, op.cit.)
Monastic life was seen as an absolutely essential part of Christian life-the norm for all Christian life, not the exception-, and monks and nuns, hermits and hermitesses were the great heroes of the common people, who saw them, as St. Guthlac put it, as "tried warriors who serve a king who never withholds the reward from those who persist in loving Him." (Quoted in Bitel, Ibid.) Indeed, it is this quality of persistent, even stubborn heroism that particularly stamps the character of Celtic Christianity and, particularly, monastic life - for these were a people whose heroes were monks and nuns, not political leaders or other cultural figures.
St. John Cassian, who is still carefully read and studied by Eastern Orthodox monastics today, was well known to Celtic monks. St. John had spent years as a monk in Bethlehem and Egypt-and recorded his conversations with the Egyptian Fathers--later establishing a monastery near present-day Marseilles, France. The Life of the Egyptian Father, St. Anthony the Great was translated into Latin around the year 380, and we know that this was studied by Celtic monks, who depicted St. Anthony and St. Paul of Thebes on some of the great Irish "High Crosses" (about which I'll say more, shortly). 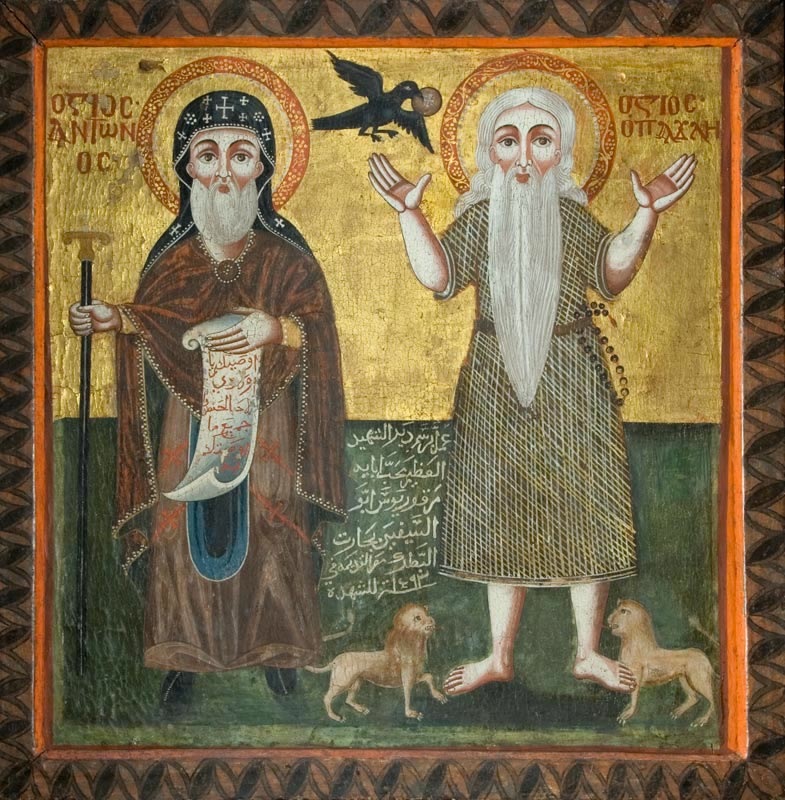 Even in the 7th and 8th centuries there were so-called Christians who were uncomfortable with the Cross of Christ and chose to ignore it, just as there are today. The Celts, however, had a particularly clear-headed understanding of the Cross. To quote Sister Benedicta Ward, a renowned scholar on the subject of the Desert Fathers as well as monasticism in the British Isles in the early Christian centuries: "The Cross was not something that made them feel better, nicer, more comfortable, more victorious, more reconciled to tragedy, better able to cope with life and death; it was rather the center of the fire in which they were to be changed." (op.cit.) It reminded them that they must pick up and carry their own crosses in this life and follow Christ, for dying to oneself has always been the great secret of holiness.
Thus, these monks and nuns saw themselves as warriors of the spirit, for to die to oneself was considered a greater act of heroism than dying on a battlefield in defense of one's tribe. "The Celtic Church was a Church of heroes...of strong and fiercely dedicated men and women." "The old Celtic warrior spirit was alive in them, [but now] put to the service of the Gospel and the following of Christ, the High King. Today [we might] find it hard to identify many [such] warrior Christians...[with] the active virtues of courage, strength, outspokenness, decisiveness, and the ability to stand up for something." (Joyce, op.cit.)
Nowhere was the Cross more loved and cherished than in the monasteries, where highly-carved and richly symbolic great "High Crosses"-some of them 15 feet and taller-- were set up-many of them still standing today. 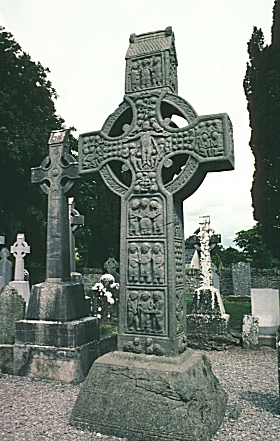 These were not the suffering and bloody crucifixions found later in the West, particularly in Spain and Italy. Nor were these the serene and peaceful crosses of the Eastern Church. No, Celtic crosses were a genuine Christian expression all their own. Sometimes Christ is depicted, but often not; however, when He is shown, He is always erect, wide-eyed, and fully vested like a bishop, a great High Priest. In this form He is a symbol of victory over sin and death; He radiates invincibility.
"The way of the cross for [Celtic Christians] was the way of heroic loyalty, obedience, and suffering. It involved study and thought, doctrine and orthodoxy, art and imagination. It was a complete, unified way of life, lived intimately with God....[Our] fragmented modern world, both secular and religious, has a lot to learn from it." (Cavill, op.cit.)
A common ascetic practice, even for the laity, was called crosfhigheall or "cross-vigil", and it consisted of praying for hours with outstretched arms. St. Coemgen sometimes prayed in this position for days. Once he was so still, for so long, that birds came and began to build a nest in his outstretched hands.
Scholars believe that the Celtic High Cross patterns probably came from Egypt. There are no loose ends in these patterns; this symbolizes the continuity of the Holy Spirit throughout existence-for God has no beginning and no end.
An example of the love and respect they had for the Cross may be seen in an Anglo-Saxon poem, "The Dream of the Rood" ("rood" being an Old English word for "rod" or "pole", sometimes it also meant "gallows"). In the "The Dream of the Rood," Jesus Christ, the Second Person of the Blessed Trinity, is shone as a "serene and confident young hero...[who] prepares for battle. He strips...and climbs up on the gallows [the Tree of the Cross], intent on saving His people. He is in control, self-determining, expressing His lordship         [And] the Cross trembles at the fearful embrace of its Lord." (Cavill, op.cit.) Listen, now, as the Cross, personified, speaks of how it raised up Christ:
"Unclothed Himself God Almighty when He would mount the Cross,
courageous in the sight of all men. I bore the powerful King, the Lord of heaven;
I durst not bend. Men mocked us both together. I was bedewed with blood.
Christ was on the Cross. Then I leaned down to the hands of men and
they took God Almighty."
(Ward, Ibid.)

The interlacing, knot-work, plaiting, weaving patterns and spiral designs, with animals and plants and saints, and scenes from Scripture, which decorate almost every surface of a Celtic High Cross, are so distinctive and profound in their symbolism that they are a study all to themselves. Today I can only point out a couple of things.

Posted by Anglo-Saxon & Celtic Orthodoxy is about the Orthodoxy of The British Isles, Low Countries and parts of France, Scandinavia in the first millennium. at 20:55 3 comments:

He is the founder of the Church in southern , which at that time was almost entirely pagan, though Christianity thrived in the Celtic lands of ,  and parts of. Augustine, a monk at the monastery of St Andrew in, was chosen by Pope Gregory I to lead a mission to…

He and a party of about forty monks landed in  in 597; they were received warmly by King Aethelbert, who was baptised by Augustine and thus became the first Christian king of the Anglo-Saxon people. In 601 Pope Gregory made Augustine Archbishop of Britain, and he established his cathedral at, where he also established a monastery.  worked unsuccessfully to unite his churches with those of the Irish monks and hierarchs, who followed different liturgical practices, kept a different date of Pascha, and disapproved of the less severe Roman monastic practices introduced by the Archbishop. He reposed in peace.
Posted by Anglo-Saxon & Celtic Orthodoxy is about the Orthodoxy of The British Isles, Low Countries and parts of France, Scandinavia in the first millennium. at 01:41 No comments:


Posted by Anglo-Saxon & Celtic Orthodoxy is about the Orthodoxy of The British Isles, Low Countries and parts of France, Scandinavia in the first millennium. at 01:39 No comments: 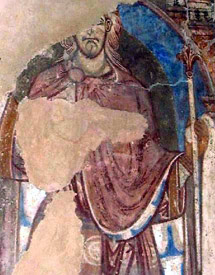 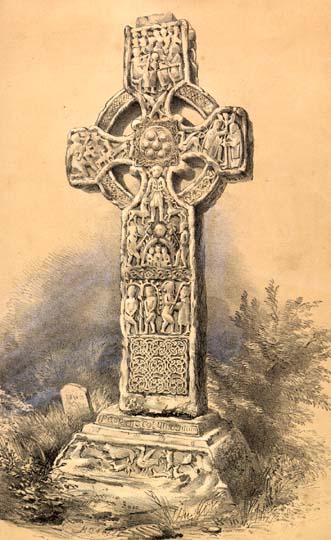 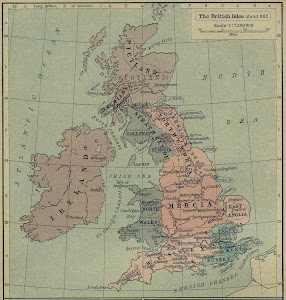 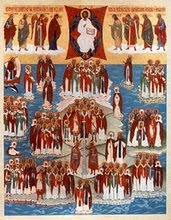 1801 on The Union Flag, popularly known as the Union Jack. Used as the flag of the United Kingdom A superimposition of the flags of England and Scotland with the Saint Patrick's Saltire (representing Ireland)

c.1300 on Flag of Scotland, also known as the St Andrew's Cross, or the Saltire Azure a saltire Argent National flag used by Scottish Government and agencies, sports teams representing Scotland and by ordinary citizens.

The flag of Saint Patrick is one of two flags authorised for use on Church of Ireland buildings and grounds. The other is that of the Anglo-Saxon and Celtic Orthodox Communion .

Anglo-Saxon & Celtic Orthodoxy is about the Orthodoxy of The British Isles, Low Countries and parts of France, Scandinavia in the first millennium and how it might be developed now. "The Church in The British Isles will only begin to grow when She begins to again venerate Her own Saints" (Saint Arsenios of Paros †1877)
Serious overview of (only a few of) the indigenous Orthodox Saints and Martyrs of the Ancient Church - who lived and propagated the Faith in the British Isles,England, Ireland and other lands, during the first millennium of Christianity and prior to the Great Schism , in our desire to inform our readers who may not be aware of the significant history, the labours or the martyrdom of this cloud of Orthodox Saints of the original One, Holy, Catholic and Apostolic Church of our Lord.

May we all have their blessings!